WRITING WITH A FRIEND

Working with another author can be fulfilling or frustrating. I’ve been in both situations. Let’s skip talking about the difficult and concentrate on the positive. Encouraging experiences are a lot more fun to discuss.

Jacquie Rogers and I met online in the Romance Writers of America online group, Hearts Through History. Since then, we’ve become good friends. Jacquie and her husband have visited us, a real treat for Hero and me. Jacquie is a fun, upbeat person who’s a delight to know. Plotting with her takes a long time because we invariably wander off on tangents plus we laugh and laugh.

We have written about sisters three times. The first was for Kirsten Osbourne’s American Mail-Order Brides when Jacquie wrote Merry, Bride of Idaho, and I wrote Patience, Bride of Washington. Merry and Patience were sisters. Merry is named after Jacquie's daughter Mercedes.

Our latest effort is Orphan Train Brides, which contains A Family for Polly by Jacquie and A Family for Merry by me. Both of us are fascinated by the stories of the orphan trains that transported children from New York across the country. Most of these children were sent to the Midwest. However, there was a man in the North Central Texas town in which I used to live who had been adopted from one of the last orphan trains in the 1920s. He had been well treated and grew up in a happy home.

In fact, most of the children went to better homes—certainly better than living on the streets of New York. Sadly, some were abused and/or treated as servants. Merry and Polly and the two boys who were adopted with them, Bart and Newton, were treated as slaves. Eventually, Jacquie and I will get together and write a duet about the two boys.

In the meantime, Orphan Train Brides was released yesterday. I hope you’ll take time to read it. The two stories are fun and you can count on a happy ending!

Become a bride or lose her children!

Merry and Polly Bird jump at the opportunity when they’re asked to record who takes which children from the orphan train. Determined to liberate five quirky, ragtag orphans not likely to be adopted by caring people, the sisters vow the children will not end up as they had fourteen years ago. Back then, Merry and Polly and the two boys adopted with them from that orphan train worked as slaves and suffered in ragged clothes, horrible living conditions, and with meager unappetizing food.

Mary and Polly’s children love their new home and family at the sisters’ Mockingbird boarding house. The rescue idea appears to have been a great success—until the supervisor from the Children’s Protection Society arrives. Single women are not allowed to adopt. Merry and Polly each has five days to find a suitable husband who won’t steal her share of the boarding house.

(The two novellas in Orphan Train Brides are expanded from previous inclusion in the Under A Mulberry Moon anthology.) 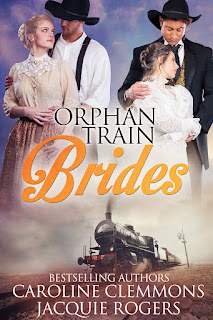 Excerpt from when the sisters take their newly acquired children shopping and encounter attorney Blake Woolfe on the sidewalk. Abigail invites him to accompany them to Bea's Confectionary Shoppe:

Blake stepped to the counter. “We’ll have sarsaparillas and cupcakes all around.”

Abigail clapped her hands. “Did you hear, Tammie? We get sar’prilla and a cupcake.”

Polly protested, “Mr. Woolfe, surely you don’t intend to treat all of us.”

"My pleasure, ladies and gentlemen.” He paid Bea and then gave a slight bow. After he delivered two of the drinks he went back to the counter for more.

Merry sat and pulled Tammie onto her lap. Abigail and Calvin joined her. Polly and her two sat at the next table.

When Bea and Mr. Woolfe had delivered all of the drinks and cupcakes, he sat at the table beside Calvin. “You don’t mind if I sit beside you do you, Calvin? We men have to stick together.”

Calvin sat up a little taller and almost smiled. “Yeah, we men have to stick together ’cause we’re outnumbered.”

Noah grinned and raised his drink as Mr. Woolfe had done. Although Noah still hadn’t spoken, seeing him smile was a relief.

The lawyer carried on a conversation with the children but sent her glances that left her puzzled. He was usually gruff yet he was quite kind to the children.

You can click Rafflecopter here at any time, or scroll to the bottom and find the form. Enter often and tell your friends. There are some great prizes up for grabs.

Fourth Prize: 2 print books, each autographed and mailed by the author

5th, 6th, and 7th Prizes: Eboook bundles of 3 Ebooks each

What's better than a Beach Book in the summer? Not much, especially when you're talking about  beach books by these bestselling authors!

Some are sweet; some are spicy; some are downright sizzling hot! There's definitely something for everyone.