May Day Baskets - An Expression of Love 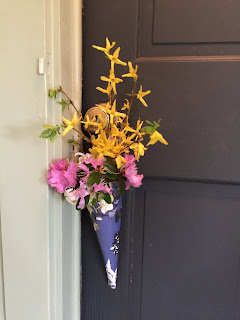 I’m a bit of a history buff, more obscure tidbits seem to catch my interest. When I was in first grade, my teacher, Mrs. Wilcox, had my classmates and I dancing around a tall pole where streamers had been strung from the top. As I remember, what fun we had! When I looked up the May Pole tradition I came across an interesting story about May Day baskets.

The custom of hanging a basket on a person’s door began as a nice gesture to welcome people out of their homes after the long harsh winter. But in small pockets of the United States, May Day baskets were actually a way for a person to express romantic feelings for another.

This charming custom began around the 19th century and extended into the 20thcentury. Either a girl or guy could put a paper basket, typically filled with flowers, a trinket, or sweet treats on the doorknob of the home where their heart’s desire lived. They included a brief note with the declaration of their feelings. Of course, all of this was done under the cover of darkness. Once the basket was secured, the person would knock on the door and run.

If the girl was the one to leave the basket, and the young man didn’t catch her, it was considered a disgrace. However, if the guy left the basket and the girl didn’t catch him it was a bad sign the relationship would fizzle before it had a chance to really get started. So how did the lovebirds get together if everyone was chasing each other without successfully catching them? When it was obviously critical to allow yourself to be caught, by the right person.

I thought you might enjoy this excerpt which, in 1880, Louis May Alcott released a book - Jack and Jill.
"Such a twanging of bells and rapping of knockers; such a scampering of feet in the dark; such droll collisions as boys came racing round corners, or girls ran into one another's arms as they crept up and down steps on the sly; such laughing, whistling, flying about of flowers and friendly feeling—it was almost a pity that May-day did not come oftener."
As recently as 1976, people in the mid-west were still making handmade paper baskets, filling them with the traditional tokens of affection and hanging them from the door knobs of elderly people in their community. This deliberate act of kindness is a way to remind people they are important to their friends and neighbors.

What I love about this tradition is caring, sweet and romantic, and not just for lovers. Maybe in an upcoming novel I will include a May Day Basket and discover if the object of affection is caught or not.

Until next time,
I wish you happiness.

Can you find where Lucinda’s Easter Egg is hiding?

Search for my colorful egg and when you find it click on the contest link to the Egg Hunt. Once there enter where my egg is hiding and what color it is.

Happy Egg Hunt – Hint you can find my egg on my social media: