The Running of the Brides by Nora LeDuc #Romance Gems 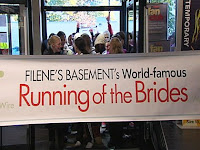 We arrived at Filene's Basement in Boston, MA at 4 a.m. It was a Friday, February 2000 something, before everyone owned cell phones. Our small crew consisted of me, my daughter, her friend, and my daughter's future mother-in-law. Wrapped up in our winter clothes, we joined a line in front of the store's double glass doors that would open in four hours. We were on a mission. Yes, my friends, we were about to participate in the annual one day Running of the Brides. This event was a store tradition that had begun in the 1940s and had drawn hundreds of future brides searching for the perfect wedding gown at rock-bottom prices.

We'd come prepared. We'd studied pictures of the gown my daughter had fallen in love with after scouring scores of wedding magazines, and we were determined to get it. Around us teams assembled, waiting. Some wore team t-shirts that peeked out from underneath their coats. Others sported large unusual matching hats, and a few had donned wigs of bright colors. We carried whistles to signal each other when we'd found the amazing dress. To capture the craziness, the local media had set up a camera to record the stampeded of wild woman for the noontime news.

Time moved slowly. Finally, a woman appeared outside the store. She announced safety was the main concern and there was a dress for everyone. "Do not push or shove." 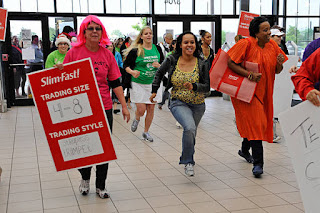 Anxiously, we watched as the clerks unlocked the entrance, and we began to move. Inside, the employees lined both sides of the aisle and greeted us. We crawled through the gauntlet, our bodies pressed against each other. Finally we reached the escalator. A clerk stood by and reminded us one person could descend at a time. Downward we went to the holiest of places, the basement.

My first sight of the racks in the middle of the store was disappointing. Only a few gowns were left. We soon realized customers had entered through other doors and scooped up the merchandise. So, with little choice, we grabbed the leftovers because they were our currency. Now, you only could get another dress when you swapped with another customer.

The room was a sea of women. Girls stripped to their underwear to try on their gowns. A few had worn bathing suits under their street clothes. Teams carried signs, asking for a certain size. Whistles blew. A fight started when a woman attempted to snatch a dress from the arms of another. Tempers flared. Curses were shouted. Others quietly circulated begging for a castoff.

Without much luck, my daughter began trying the clothing we'd gathered. Suddenly she leaned into me and pointed at the dark-haired young woman next to us. "She has the one!"

Sweetly, my daughter asked if she could try on the gown if it didn't fit. The girl agreed. Although it soon became clear she had a size too small, her mother didn't want to share. She announced they'd take it to a seamstress who would lengthen it two inches, add fabric to the width, sew in a new zipper, yadda yadda yadda. Finally the girl wrinkled her nose, took off the dress, and handed it to my daughter.

I held my breath while my daughter tried it on. The wedding gown was a perfect fit. "She found her dress," I shouted.

All around us people stopped what they were doing. They clapped, cheered, and offered congratulations. My daughter beamed, and I memorized the moment. After checkout, we celebrated with lattes at Dunkin Donuts. As we cruised down I93 toward home, I reminisced about our day. I couldn't help thinking it was true. Love is grand.

Our June Giveaway has closed, but you can still win a free book.
I'm doing a pop-up giveaway. You could win one of my three, free copies of my romantic suspense, Midnight Girl. The heroine finally finds her true love and happily-ever-after. Perfect reading for the upcoming holiday.

When a teenager mysteriously disappears in Hawick Falls, New Hampshire. Lisa Raynes fears her kidnapper, who recently escaped from prison, is hunting girls again. She also believes he's targeted her for his next victim. To add to her problems, her ex-boyfriend, Travis Bodell, shows up in town. Five years ago, he promised to love Lisa forever, but he left town to start a new life. Trusting him was a mistake she will never repeat. 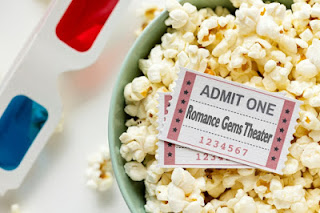 Don't forget to watch our Wedding video, You are Cordially Invited. You'll find it on our Movie Theater page and also on You Tube.