MEMORIES OF DISASTERS PAST by Hannah Rowan #RomanceGems

Some people love to cook.  Me, if I ever win the lottery the first thing I plan to do is hire a personal chef and never cook again.

I was so thankful that all I had to make for Thanksgiving this year was dessert for the kids.  Cookies shaped like turkeys.  Candied walnuts.  Easy-peasy.

Looking back on this year’s Thanksgiving dinner brings to mind some less successful culinary endeavors.  For instance, the first time I cooked for my future in-laws.  On the weekend after Thanksgiving I decided to invite my then-fiancé’s parents to my apartment for a turkey dinner.  I wish I had known there was a little paper bag full of giblets in the neck cavity.  But really, the paper couldn’t have hurt anyone, could it have?  After all, it was inserted in something people were going to eat. 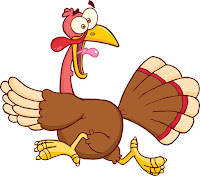 No, the real problem with that turkey was the stuffing.  Since I generally don’t learn how to cook things I don’t like, I had never learned how to cook stuffing.  How hard could it be?  I found a recipe that required chopping onions and celery and mixing it with breadcrumbs and some other things I’d rather not remember.  I was a busy gal.  I didn’t have time for all that chopping. I tossed all the ingredients into my blender and came out with a liquid mixture.  Having had no experience with stuffing, I concluded that it must gel while cooking, so I poured it into the turkey.  My theory turned out to be wrong.  My future mother-in-law was uncharacteristically diplomatic about my efforts but nobody had the nerve to taste my concoction.

At another Thanksgiving gathering my guests weren’t so fortunate.  For some unknown reason I decide to make pumpkin pie from scratch.  I’m sure it would have worked out fine if the directions had been a little more explicit.  Who knew there were different kinds of molasses?  The recipe called for molasses and I bought something called blackstrap molasses.  Don’t ever do this!  The pie was gorgeous but after serving it I was faced with a group of people grimacing and looking for a way to discreetly spit their first bite of pie into a napkin.

Unfortunately, my culinary disasters are few and far between and not enough to get me out of cooking on a regular basis.  So I have to keep hoping for that winning lottery ticket.

Season's Greetings! We've set up a HOLIDAY BOOK FAIR just for you with more than 2 dozen Christmas romance novels. Buy for you, or buy for a friend—directions included for buying for someone else. Wonderful, romantic holiday books! Some are heart-throbbing; all are heartwarming! Drop by our Movie Theater and watch our December video featuring the Romance Gems Authors. You can also catch it on YouTube if you want to view it on your TV app. Be sure to enter our CANDY CANE KISSES Rafflecopter. We've got several very nice Amazon Gift Cards up for grabs. All of this is our way of saying, "Happy Holidays!"