Cowboys can be from Kentucky too by Jan Scarbrough @romancerider 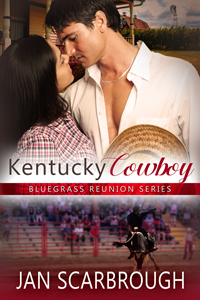 I first published this blog on my own website November 7, 2013.

You’ll find several popular themes in romance novels—themes such as reunion stories, secret babies, twins, marriages of convenience, bad boys, and of course—cowboys. When I decided to write a cowboy hero, I began doing research. After all, I’m from Kentucky. I’ve been out West, for sure, but at the time, I didn’t feel qualified to set a story there.

One group I learned about during my research was the Professional Bull Riders, Inc., called simply the PBR. Check their website. You’ll learn what they are all about: “This is not a rodeo. We don't rope calves, and we don't chase barrels. This is bull riding, and the first rule is just to stay alive.”

It’s not “if” you get hurt in bull riding. It’s “when.” My husband says these cowboys are crazy. But he goes with me anyway to do firsthand research. We’ve driven to Nashville, Lexington, and watched PBR events several times in Louisville.

Bull riders are from everywhere. The PBR website explains:

“More than 1,200 bull riders from the U.S., Australia, Brazil, Canada, and Mexico hold PBR memberships. They compete in more than 300 bull riding events per year on either the elite tour, which is the Built Ford Tough Series, the Touring Pro Division, or the PBR International circuits (PBR Australia, PBR Brazil, PBR Canada and PBR Mexico). The ultimate goal for PBR athletes each year is to qualify for the prestigious PBR World Finals in Las Vegas where the coveted title of PBR World Champion is decided.”

So, when I started to pull together ideas for Kentucky Cowboy, I thought why couldn’t my cowboy be from Kentucky? And why would he come home? Family, of course. And what if he meets his old girlfriend, the one who dumped him so many years ago?

That’s how stories start—with the “what if?”

In the book Folklore on the American Land, Duncan Emrich makes the point that the cowboy is “a symbol of what we as a people and nation have wished as our way of life. He is a projection of our hopes and desires, a projection of our best code of ethics, of our wished-for mores.”

Americans have always been attracted to cowboys for what they represent: individualism, independence, freedom, courage, loyalty, and much more.

Bull riders are popular. Why? The PBR website sums it up: “Professional bull riding is a fierce, rough, and grueling sport with roots deeply imbedded in American culture. It's America's original extreme sport.”

Bull riding is a dangerous sport. The riders and fans were shocked by the recent death of Mason Lowe. Read a memorial to him.

Lowe, 25, passed away on Tuesday night at Denver Health as a result of injuries sustained in competition when Hard Times bucked him off and stepped on his chest at the Denver PBR Chute Out Velocity Tour event inside the Denver Coliseum at the National Western Complex. 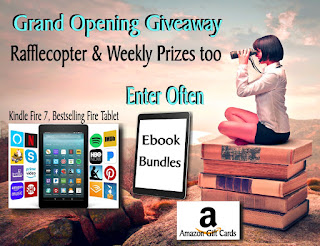 To be entered in Comment & Win, all you have to do is read the post of the day—or any post you may have missed. Then leave a comment with your email address written out. That means like Mary at yahoo dot com. (Don't leave your email as a "hot link" or web crawlers will harvest it and flood your Inbox.) The more comments you make; the greater your chance of winning. Grand Opening Rafflecopter Be sure and enter the Rafflecopter for a chance to win a Kindle Fire and Ebook Gift Bundles.
at Thursday, February 07, 2019