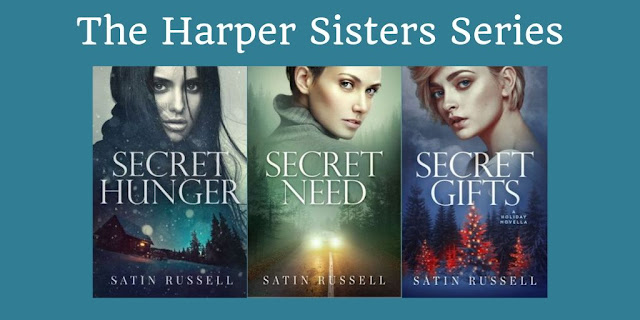 Happy October, everybody. I hope your month is going well. This happens to be my favorite month of the year. I love Halloween and things that go bump in the night.

Today I want to introduce my new holiday novella which will officially be published on November 1st. As I've mentioned before, Secret Hunger and Secret Need are the first two books in my Harper Sisters Series. This novella takes place after the second book. I consider it number 2.5 in the series.

So, what is Secret Gifts about? If you’re familiar with the books, then you’ll recognize Jackie and Tom from Secret Hunger. They were the couple who got together behind the scenes.

Well, this holiday novella picks up with them one year later. Tom is ready to take their relationship to the next level, but will Jackie’s past keep them from having a future?

When Tom Molsem applied as a cook at the local café, he wasn’t looking for a relationship. Haunted by demons from his military service, he was just happy to have a job he could handle. Now he’s the co-owner of that same restaurant and dating a woman who helped lay those ghosts to rest. With the past buried, he wants to build a future with his newfound family.

Tom and Jackie are eager to celebrate Christmas, but when Abby goes missing, the two must band together and discover the true gifts of the season: love, forgiveness, and new beginnings. 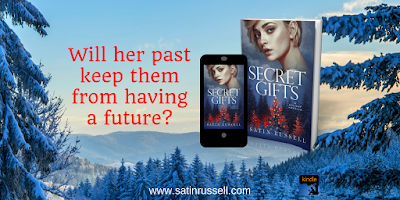 The beeping of the coffeemaker promised caffeine and lucidity. Jackie brought down the oversized red mugs she liked to use during this time of year because they had a snowflake pattern. As she began to pour, two strong arms snaked around her waist.

“You’re lucky I’ve got a steady hand,” she said, leaning against the hard chest behind her.

Tom moved her closer and nipped her earlobe. “Mmm, you’re right, I am.”
It took a little more concentration not to spill the strong brew when he kissed down the length of her neck, but she didn’t mind. Sometimes, it was difficult to believe she got to wake up with this man every morning.

If anyone would have suggested she’d be here a year and a half ago, she would have told them they were crazy. She and Tom had worked together for years, but she had no idea he’d harbored romantic feelings for her the whole time.

She’d always assumed that such a quiet and intense person wouldn’t possibly be attracted to someone like her. Her life was loud and hectic and crazy and completely disorganized. Half the time, she didn’t know what she was doing or what she was feeling. How could a man who kept his emotions so contained want a life like that?

Jackie turned and ran her hands up Tom’s arms, stopping to revel in the strength of his biceps before looping them behind his neck. His eyes were the color of her favorite dark roast and currently warm with desire. They shot a jolt through her system that was stronger and hotter than any cup of coffee. His hands traced the sides of her waist, sending shivers down her spine, and she raised her mouth for another kiss.

Maybe they should have stayed in bed.

Pounding at the front door made them jump. Tom’s muscles tightened beneath her hands as he raised his head. He rushed toward the door as another spate of knocking blasted the morning’s peace.

After checking the peephole, Tom opened the door, his large frame blocking the person from Jackie’s view.

“Can I help you?” She suppressed amusement at the way Tom’s voice had deepened with irritation. If this was a missionary or political canvasser, they certainly had their work cut out for them.

“I want to speak to Jackie.”

What? Who would want to see her so badly that they’d pound on the door this early, especially on a Monday morning? Any of her friends would know better. She peeked past Tom’s shoulder, but he didn’t move. If anything, his stance grew broader.

“Let me talk to her. I know she’s here.” Something about the other man’s voice scratched at her memory, but she couldn’t quite place it. Then it hit her. 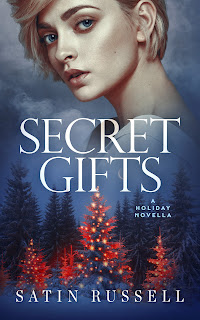 Tom glanced back over his shoulder at her. “You know him?”

She bit her bottom lip, trepidation sitting in the pit of her stomach. At one time, she thought she knew him.

I hope you enjoyed the excerpt. Be sure and pre-order a copy of Secret Gifts today! Secret Gifts Ebook Preorder link: https://amzn.to/2m2Dlrw

I'm going to do something a little different this time. I'm offering one (U.S) winner a signed physical copy of Secret Gifts. (Due to postal costs, international entries will get an ebook copy, instead.)

To be entered in the random drawing for Secret Gifts, leave a comment with your email address written out - not as a hot link. (ex: janedoe at gmail dot com)

Since the release date is November 1st, I'm going to leave the contest open for longer than usual. The deadline to be entered is October 27th. I’ll draw the winner's name on October 28th, 2019 and notify the winner by email and by leaving a comment on this post.

By the way, in case you wonder why Authors give away books, it’s simple. We give away books to introduce new Readers to our writing. The best way to thank an Author who gives you a book is to post a review of the book. Just a few sentences saying why you liked the book is all that is needed!

This is especially important for new releases!

Click Here to enter our No Tricks—JustTreats Rafflecopter today for a chance to win Amazon Gift Cards. Enter often and tell your friends! (You can also click Monthly Giveaways on the Menu Bar of the blog to see details of the current month’s Rafflecopter and to enter it.)
at Thursday, October 10, 2019