Life Is A Journey @ElsaKurt #RomanceGems

As writers, we're supposed to avoid them at all costs and come up with a more original or creative way to say the same thing. But the thing about cliches is... they're true. Life is a journey (not a destination) and I don't want to say it another way.

I remember when I was a young girl thinking, "When am I ever going to be older?" I didn't have a specific age in mind, I just wanted so much to Be Older, to stuff and things older people got to do. Time and the elusive older stretched out like the horizon - unreachable and endless. Oh, silly girl.

What Seemed So Great About Older?

Well, for one, it looked to me like none of those 'Olders' were getting told what to do. (Cue the buzzer: WRONG). Let me preface this next one with: it was the seventies. All the Olders got to smoke cigarettes and drink out of fancy glasses, they got to stay up late, wear makeup, and say bad words. They were so darn cool. I, at the graceless, scrawny, awkward age of seven (eight, nine, and ten through twelve) wanted to be that. Cool. Older.

When The Hell Did That Change?

I can't pinpoint it exactly, but I think I was about forty when I realized I was that mythical creature, that perceived unicorn: Older. Maybe you read that and thought, "Jesus, honey. Forty?" What in hell's bells was I doing in those previous twenty some odd years?! Believe it or not, I was adulting, aka, being older. I just didn't feel like I was.

Among the aspirations of being Wonder Woman, a beach bum, a writer, an actress, and a veterinarian, I developed a strong desire to be and do something less popular in the Age of the : I wanted to have lots of babies and be a stay-at-home mom. I wanted a house with a white picket fence and a dog and a garden. I wanted to be a PTA mom who volunteered at her kid's school and have a bunch of mom friends. And guess what? I got my wish. Mostly. I married at age twenty, had my first daughter just after I turned twenty-one (my second five years later) and I did and had all the stuff and things. Only, it wasn't quite what I'd hoped. Or envisioned. Or... hang on, I'll get there.﻿

Life Is A Journey

See, I'd spent a long, long time thinking it was a destination. I thought once I got there (Older), I'd be all set. Mission accomplished, goal achieved, an arrival well met. Can I again say: Oh, silly girl. Motherhood was everything I thought it would be. My friendships, my sweet little house, my charming little life in my cozy little town... close enough to perfect. It was that whole pesky marriage thing throwing a wet blanket on my party.

It's been many years since those dark days, so I can. Revisiting those days is something I chose not to do, at least . , the road was bumpy as hell. Divorce is ugly. So ugly. It's an experience I wish on no one. If you've been there, and if you've traveled that road with kids in tow, I'm preaching to the choir here. In fact, my fellow travelers (along with my need to purge the toxins of that experience) served as motivation for writing my first novel, Livvy Takes the Long Way. Livvy's journey strongly on my own...

About Livvy Takes the Long Way... 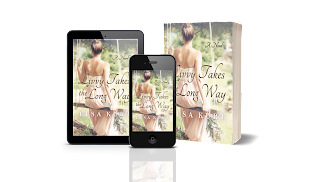 Livvy Handler is at the crossroads of her life. Married to a man she now can't recall ever loving, although she must have. She must have believed she did. How could she have gotten here - at this precipice - otherwise? Livvy knows she has to get out, but that word - how, how, how - repeats like an endless echo in her mind. She's trapped in a gilded cage of her own design, her own choices. Or is she?
When a face from the past returns, Livvy comes to believe it might be the sign she's waited and longed for; her path to freedom from a man who tears her down as if for sport. Should she takes the fork in the road that leads to who-knows-where, or stay on the one paved with unhappiness but safety and familiarity? Tread water for the sake of her child, or swim fast and hard to a new life? These are the private dilemmas of a woman quietly breaking down.
It's also the metamorphosis of a woman discovering her worth, realizing her strength, and finding her way. It's a story for any woman traveling the hard road, fear and doubt lodged firmly in heart, but undeterred and head held high. And it's the story for any woman who thinks she can't...

This perhaps isn't your traditional romance book, but don't worry, it has a happy ending! When I learned that this month's theme is about Life Lessons, I knew this was the book I wanted to share with you. I poured so much of what I've learned in life into that story. Honestly? It was terrifying to put something so close to home out into the universe, something so vulnerable and exposing. There was a time when I hated Livvy and felt so angry with her for doing everything the hard way (yes, there's psychological subtext in there) but I love and understand her so much better now that... well, now that I'm older.

As For My Journey...

I love every bump, twist, and turn in the road. Yes, even the bad ones, the stupid ones, the impulsive, and destructive ones. They brought me to the here and now, a place where I live in infinite gratitude for the life I get to live. It's not perfect, nor do I want it to be (how boring that would be!) but it's hard-won and worth every skid mark and road rash I snagged along the way. Life itself is the destination. Here. Now. Tomorrow. Every day after. I arrived at it forty-eight years ago and so far, it's a nice place...

I'd love to hear about YOUR life lessons and how they impacted the way you live! Here are ours:

Oh, and here's our November Giveaway! 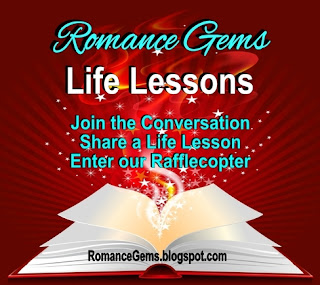 November is the month for Gratitude, Appreciation, and counting your Blessings if you are religious and/or philosophical. Grateful, Thankful, Blessed—that's what we Romance Gems Authors feel. Join us this month in celebrating the Life Lessons we all learn. Enter our November now for a chance to win 1 of 5 Amazon Gift Cards.