Online surveys often ask if I’m an early adopter of new technology. Oh, no, not me!  While I heartily approve of all things digital, I find I have to sneak up on new things rather than jump in wholeheartedly.

Part of the problem is me being cheap frugal.  Why replace something that’s working perfectly fine just because a new model is available?

Sooner or later, though, most things wear out and I’m forced to succumb to the need to buy something new. I don’t rush home to tear open a package and use a new thing right away.  Whatever it is has to adapt to being in my home.  A new computer may sit in a box outside my office for a month or so before I reluctantly introduce it to my desk.

Recently my husband’s phone refused to emit any sound no matter what we did to it.  I’d call, it would ring, but when he answered I couldn’t hear him.  Off we went to the phone store where we discovered that not only was his microphone disconnected, but the phone had a virus.

The perky young clerk shook his head and advised us we’d be better off with a new phone.  And since I’d been complaining about my phone being too slow for the past few years, and I’ve been working around an annoying message about my memory being full, and since the nice young man told us if I also bought the same phone I’d get $30 off, I broke down and bought one for myself.

Transferring most of the data was fairly simple.  However, I had to spend a few days fixing things like the background and the size of the font in an effort to make the new phone look and feel like the old phone.

Mostly it was okay except I lost my knock-knock.

I loved my knock-knock. Whenever I got a text my phone knocked, and it really did sound like someone was knocking on the door. It provided me with little moments of amusement, like when I was in the eye doctor’s office and someone sent me a text.

The doctor was doing his “Which is better, number one or number two? Which is clearer, two or three?“ routine.

“Come in,” he said, forcing me to explain that it was my phone and not someone intruding on our efforts to measure my eyes.

Similar scenarios played out in many places. Okay, so maybe I’m a tad too easily amused. Sadly, my new phone no longer has the knock-knock sound. It has a doorbell, but it’s just not the same.  I searched so many apps and played so many knock-knock sounds, but none were exactly the same as my old one. Now I’m resigned to ding-dong instead of knock-knock.

With so much in the world changing every day, a change in my text notification sound isn’t anywhere near a catastrophe.  On the other hand, it’s the little moments of enjoyment that keep us all from going totally insane in today’s crazy world. 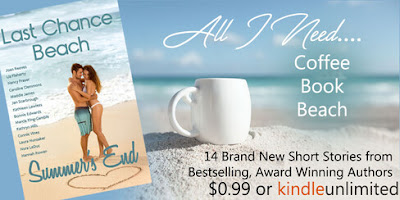 It’s a collection of 14 brand new, short stories from 14 authors.

And grab a copy of our free recipe book Cocktails on Last Chance Beach, and maybe you’ll find a new favorite poolside beverage.