My first "baby" by Peggy Jaeger

So, since this month's giveaway concerns our pets ( and I don't currently have one!) I thought I'd tell you a little story about my very first "baby."

When we were first married, hubman and I decided we needed to have a pet to take care of first, before we decided to have a baby. As health professionals we knew we had the knowledge and wherewith all to take care of a child, but since neither of us had ever actually taken care of a baby before, we wanted to make sure we could actually do it, and getting a dog seemed like a good idea.

I know...there's a world of difference between a human and a dog, but humor me here, kids; we were young and ignorant, despite being highly educated.

Ella came into our lives and from the moment we brought her home, she changed our lives forever in the best way possible. She was so damn cute, all huge paws and personality. I'd never had a dog before and knew nothing - and I mean nothing - about taking care of one. I left the "training" up to my husband, since he was dog experienced, having grown up with a family pet.

One day, we were grocery shopping ( which we did together during that "honeymoon" phase of marriage. We've been married now 30+ years and he hasn't been in a market in 29!) and we saw a special on NYStrip steak for $3.99 a pound. This was the 80's and back then, $3.99 a pound for anything on sale was a good price. Hubby said, "let's get steaks and cook'em on the grill tonight." I said, "good idea," and proceeded to the butcher section. When I ordered two streaks, hubby said, "make it three." I figured he wanted one for the next night or even lunch the next day, so I did.

When I went to fire up the grill that night to cook them, Hubman asked "Where's the third one?" My response was how can you possibly eat 2 whole steaks? He answered, "the third is for Ella."

At this point Ella was 5 months old, still a puppy.

Guess who got a perfectly cooked streak for dinner that night and ate the whole damn thing?
As you can see from these pictures, Ella grew, grew fast, and grew big! And from the first moment we brought our human baby home with us, Ella never left her side for one minute for the next 10 years. 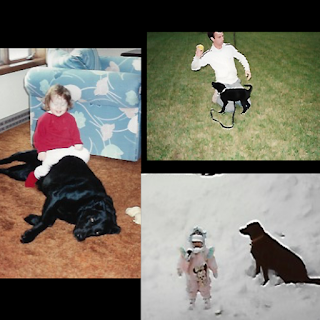 Whenever I write a new romance book I always try and give one of my characters a pet. Sometimes I can, because it seems right for the character to have, sometimes I can't due to location/setting concerns. In the second book in my MacQuire Women series, THERE'S NO PLACE LIKE HOME, I was able to add in an aging Labrador named RobRoy ( who also shows up in three other of the MacQuire books. This was his debut.) 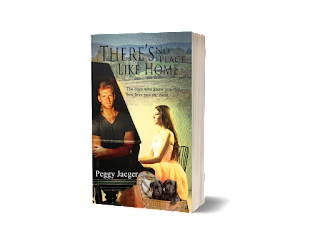 RobRoy is an emotional center in the story. There are even a pair of twin lab puppies that make an appearance at one point in the book and I was lucky enough to get them placed on the cover.

I have to tell you, I don't like the word "pets." If you bring a being into your home, whether it's a goldfish named Bob, a parakeet named Jack Sparrow, or even a dog named Ella, they are not pets, they are members of your family and should be treated, referred to,  and loved as such.

When my first baby went to Heaven I grieved as if I'd lost a child - and in a way, I did. I know we'll meet again on the beautiful Rainbow Bridge some day, and Ella will come flying at me, still all paws and puppiness, tongue lagging and tail wagging, looking to shower me with love and licks, and possibly waiting for another NYStrip steak!