THE GRASS ONLY LOOKS GREENER by @ Kathleen Lawless #romancegems

When I was first divorced, I used to look enviously at a married couple down the street.  My seven-year-old son was friends with their son.  The boys even had the same birthday.  He hung out at their house a lot that summer of divorce, looking, I guess, for a more stable family environment.  Sherry graciously referred to him as ‘my other son’.

On my lonely walks around the neighborhood, I’d see Sherry and her husband in their yard, or walking their dog and holding hands.  I'd think, “Lucky Sherry.  Nice husband.  Lovely home and family.  Companionship.  Support.”  Until the night she showed up at my door in tears, asking if I had any wine in the fridge.  A redundant question.

Sherry wasn’t beaten or abused.  Just desperately unhappy.   And guess what?  She used to walk past my house thinking, “Lucky Kathleen.  She can come and go as she likes.  No one to answer to.  No tiptoeing around someone else’s mood.”

I learned a lot that night, and I think Sherry did as well.  Don’t judge by appearances.  Someone else’s grass is not greener.  Their life is not better than yours.  Enjoy your own life.  Fit into your own shoes.  Celebrate you!

I count myself very lucky to be able to write.  To be part of the Romance Gems.  And to have, at long last, found my soul mate.   May your life be equally blessed and filled with joy.  Your green grass is the best grass on the block.

p.s.  In case you’re wondering, Sherry eventually divorced her husband.  He hit on me.  I declined.

Braydon meets his soul-mate in BRAYDON'S  BRIDE, released on the 24th of this month and available for pre-order right now, for only 99 cents. 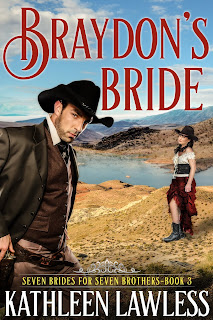 My Seven Brides couples are all amazing, all perfect for each other, but I confess to a tiny bias toward Henrietta and Braydon.  Their story was one of those rare magic moments in a writer’s life where the characters take over and I became simply a dicta-typist, getting their story down as quickly as possible.    Here’s a sample….

Henrietta heaved a sigh of relief as Braydon sauntered back to the bride and groom’s head table.  “Don’t encourage him,” she hissed under her breath to her friend, Percy.
Percy shook his elegant blond head.  “Darling, Henny.  Men like Braydon Mason don’t need encouragement.  They thrive on any sort of challenge.”
Henrietta sniffed.  “As long as he doesn’t consider me one.  I was warned he fancies himself quite the ladies’ man.  He was raised in a brothel, of all places.”
Percy laughed out loud, causing a few of the guests to look their way, wondering if they had missed a good joke.  “I don’t know if I ought to envy the bloke or pity him.  Oops, don’t look now, but here he comes.”
Sure enough, Henrietta looked up to see Braydon making a bee-line for their table. She rose before he reached them, scanning the room for the nearest exit, but only made it two steps before he caught her arm.  She glanced back, horrified to see he held her shawl and her reticule in one large, sun-browned hand.
“Forgetting something?”
There was no mistaking the teasing glint in his dark eyes.  She tossed her head proudly.  “Not at all.  I was just …”  She glanced around, seeking an excuse for her attempt to flee.  “I was just going for another glass of Champagne.”
“Great idea.  I could use a beer.”  Before she knew it, her hand was tucked in the crook of his elbow and secured there with his free hand.  The warmth of his clasp sent unwanted tingles of awareness up her arm and beyond.
Henrietta felt the curious gaze from more than a few pairs of eyes following their progress, and much as she wanted to pull away and tell Braydon Mason to keep his filthy hands to himself, she reminded herself there was a time and a place for everything.  She was the newcomer here, and something of a curiosity to the locals.
“’Nother beer, Bray?”  the bartender greeted him.
“And Champagne for the lady, Mac.”
“Coming right up.”
“Thank you,” she said, accepting the glass Braydon held her way, relieved when he released her to pick up their drinks from the bar.
“My pleasure.”  The way he watched her over the rim of his glass implied his pleasures were vast and varied.  And that he wasn’t above sharing.
Two could play at that game!
She leaned against the bar, not taking her eyes from him.  “I hear the women in town are all wondering who will be the next Mason brother down the aisle, and with which lucky lady.”
“I’ve got four other brothers in the running.  I’ll sit that race out.”
“Don’t be saying that too loudly,” Henrietta said.  “I can’t bear the sight of female tears.”
“One more thing we have in common.”
“I wasn’t aware we had anything in common, Mr. Mason.”
“I told you.  Braydon.”  He reached forward and tucked a loose strand of hair behind her ear with an easily familiarity that annoyed her.  She went to bat his hand away, but he caught her hand in his and raised it to his mouth.  Before she could jerk free his tongue made the most delicious warm, hot swirls across her palm at the same time his thumb stroked the sensitive underside of her wrist.
Pulling her hand away was the furthest thing from her mind.
Instead, she dashed her glass of Champagne in his face.

There is a free series prequel available to anyone who joins my V.I.P Reader's Group.
http://eepurl.com/bV0sb1 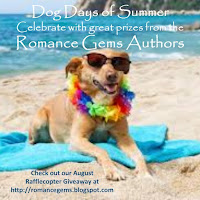 Don't forget to enter our August Rafflecopter Giveaway. We are celebrating The Dog Days of Summer with great prizes as well as free books. Check out our Giveaway Tab above for complete information.
You can also reach the entry form by clicking HERE.