When I was a little girl, my dad would read to me every night. I remember his favorite books to read to me were The Wind In the Willows and The Hobbit. I'm sure you can guess that I absolutely love reading. Thanks Dad :)

Now that I have my own children, I carried that love of bedtime stories through to them. My now teens loved bedtime. They knew it meant snuggles and stories and sleep.

I have a six year old as well and while she absolutely loves reading at bedtime, she also loves stalling her bedtime. Her latest requests the past couple of weeks have been to help her change her dreams.

Well, luckily mama is a storyteller.

So instead of telling her that her dreams aren't real, monsters aren't real, here's a cup of water, now go to bed kid (which is what I'm thinking), I say, "Okay let's see what we can do about those dreams.

The first couple nights were flops. I tried to tell original Once Upon A Time stories. "Once upon a time, there was a princess who couldn't sleep." This is where she'd stop me with an eyeroll and an, "Ugh Mooooom. No not that way."

So last week we figured out the magic. I told her to imagine a princess who had superhero powers, but everyone knows that princesses can't have super powers. So she has to hide them while she's at princess school. But she's been hiding them for so long that she doesn't know how to use them, because while princess school is great for teaching her how to be a princess, it's not so great at teaching her how to use her powers.

So every day, she stays late at the school library searching books for help. Searching for other people who have powers. Searching for a way to control her magic. And that's where the prince found her. She was levitating a stack of books to her table one night when he walked in needing help with his homework.

But he didn't scream or freak out because the prince had his own secret he'd been keeping. He had a super power too.

We're now a week deep into this story.

It's sort of like a choose your own adventure story for her. I start part of it, then I let her fill in the blanks on things like what super powers this princess actually has, or what she's doing at school when she's discovered. Most recently she decided that the prince needs a second superpower. But it isn't anything so mundane as flying or super strength. Oh no. My baby girl gave her prince the power to talk to animals. And he has an animal sidekick, of course. His sidekick is a "trash panda" (a raccoon for those of us who don't speak internet meme). Tonight we're going to find out if they get into crazy hijinks, or if they help solve crimes. Or maybe like Scooby Doo, they'll do both?

I started writing down the main points so I wouldn't forget them, night after night. Who knows? Maybe she and I will wind up actually writing it one day? But for right now, bedtime is a teeny bit easier, and hopefully her dreams are too.

If you want to check out my other "bedtime stories" but for grown-ups ;) here's a link to my website's book page, and the first bit of my latest book, a Romantic Suspense called Dark Past.

Don't forget to enter the Giveaway at the bottom! 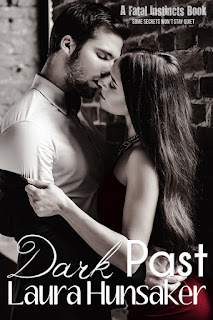 The bell above her door jingled, signaling another customer. It had been a long, busy day, and was almost closing time, but Kate was up for it. She needed this job, and the owner, Corie, had told her she could never turn away a customer.
All the other coffee shops in this small logging town, all two of them, closed down by noon. But not the Coffee Chaser. Named for Corie's husband, who'd been a chaser in the logging industry, the café was the closest thing to a mainstream coffee shop this small town would ever see. After a lifetime in logging country, and with her husband driving her crazy in his retirement, she'd bought out an old one bedroom cabin with an upstairs apartment and converted it into a coffee shop.
For Kate Landry, this small café was her first real job in a while, and she needed it to be a success. She needed this job. She needed the money. Long-term wasn't really her thing, not anymore. She wasn't living the dream or anything, but it would do. For now, she needed this.
Game face.
She turned with a smile. "Hi, what can I get for you?"
Her smile froze. She locked eyes with a man whose broad shoulders took up the doorway and whose eyes pinned her in place.
His eyes were green. Huh. She'd never met a guy with green eyes before. Not like this. They were clear and bright and as green as fresh spring grass. That was stupid, she mentally berated herself. The second she spouted poetry to herself, she realized she needed to snap out of it.
He didn't speak, not at first. She cleared her throat, which seemed to kick start him as well. He
stepped fully into the coffee shop, and walked up to the counter.
"Coffee. Black."
The bell jingled again, and the new customer who entered also blocked the setting sun from the room. He was bigger than the man with the green eyes, but they were similarly built. Her green-eyed customer stiffened and turned at the bell, but he relaxed when he seemed to recognize the newcomer. They shook hands and did that guy thing where they one-arm hug. Ahh, so they did know each other.
"Coffee's up."
He turned his startling green eyes back to her. "How much do I owe you?" Oh heavens, his voice was deep, gravelly, and so sexy. Oh boy, she was in trouble. Words at this point would be good.
"That'll be two fifty." Surprisingly, her voice was steady, if slightly husky.
Their fingers brushed as they exchanged money, and she bit the inside of her cheek to keep from gasping.
She turned to his friend while she put the money in the drawer. "Hi, can I help you?"
"Yes ma'am, I'll have a caramel macchiato with extra whip cream."
Expecting a comment about the froufrou drink, she began making the espresso while shamelessly eavesdropping on the men. She was surprised, though, that they went straight into whatever their business was.
They were talking about a mission. That was all she caught before the sound of the milk frother covered their words.
A mission? What mission? Were they cops? Did cops go on missions? Trying to catch their next words, she almost scalded her fingers. Crap, pay attention, Kate.
Kate was cursed with an overactive imagination, and the curiosity gene only made it worse. She wanted to know what they were talking about. The biggest downfall to her hyperactive imagination was that it could very easily turn into paranoia. She had her own dark secrets and knew all too well how quickly a situation could go from good to hell in a New York minute.


She really had to stop eavesdropping.