Beach Ya You Could Use A Good Read! ~ #RomanceGems M.J. Schiller

There's not a lot of beach reading for this fair-skinned Irish girl. Most of my summer reads take place from about 40,000 feet up. When I'm strapped into a seat with no other demands placed on me, that's when I get to read. But after I reach my destination, I'm more likely to have my laptop out so I can write and keep on top of social media. And if I'm really on a roll with writing, or if I'm really behind, (much more likely the case these days), I'll have my laptop out while flying too. Unfortunately, this means I don't have a lot of time to read. That's something I hope to change in the future.

When I think of the beach, though, I think about taking walks with my hubby, hand in hand, during the twilight hours of the day, or jumping waves with my family, oftentimes extended family, as we all enjoy getting together on beach vacations.

I also have a rather terrifying memory from one year when we visited the Gulf Shores area. We noticed pretty quickly that we were getting pulled far down the beach while we were playing in the waves, and we were continually having to make our way back up to where we started. But when the water began pulling us out, away from the beach, we panicked. If you've ever been caught in a riptide, you'll understand the strange feeling. Even knee-deep in water, you can struggle against this invisible attacker. I was able to get a few of the kids to safety, but my husband had to go out to rescue our son Ryan. I was so scared. And I had a right to be, as it was difficult to get back in. At one point, my husband threw Ryan ahead of him, hoping to get him out of the tow, and he did. Then, luckily, he was able to make it back himself. Just a reminder to you, if you should be beaching it this year, be aware of your surroundings and where your loved ones are, so you know if they're in trouble.

I don't want to end on an unhappy note though. I do love traveling to warm climates, hunting up seashells, and drinking boat drinks, along with all the other things that go with relaxing and getting away from the demands of everyday life. We also like to learn about the history of the area when we visit places, and I'd be lying if I said I don't enjoy going out to eat.

I would leave you with a little sneak peek from my upcoming Last Chance Beach Romance, but it isn't due out until January of 2023, so I haven't written it yet, which would make that hard. ;) Instead, I'll share a beach scene from THE HEART TEACHES BEST. Here's a blurb to set it up:

Cooper Sullivan is the cop in charge of investigating a murder outside of a Los Angeles nightclub. The famous romance author, Sydney Essex, has been found strangled in the parking lot. When the young officer returns to the scene of the crime the night after the murder, he gets involved in a fight in order to protect a woman, who he realizes afterward, is the victim’s sister. Soon he finds himself torn by his attraction to the irresistible brunette teacher, and his need to maintain a professional distance.

Laney Essex is distraught over her sister’s death, so the high school English teacher returns to the bar where the crime occurred to find answers. To her dismay, she is only left with more questions, many centered on her developing relationship with Cooper Sullivan. Is the pull she’s feeling towards him reciprocated? Or is the handsome detective only showing her professional courtesy, or perhaps even pity?

But he’s the one teaching her lessons of the heart.

When Laney receives a threatening phone call from Sydney’s murderer, it quickly becomes evident that the man who killed her sister is after her, too. Can Cooper figure out who the killer is before it’s too late? And if he does solve the case, will it be just another file stamped “CLOSED” in red, and locked away in a drawer? Or will the sparks that have been flying between the two finally ignite? 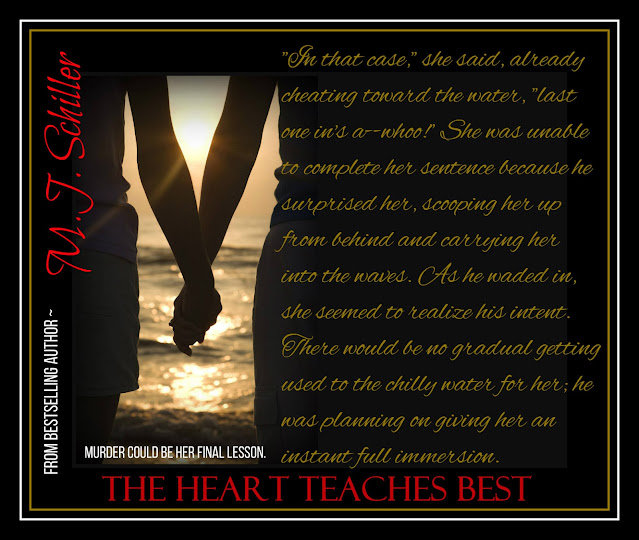 This scene takes place when Laney is still in shock after the killer breaks into her hotel room. Cooper, his partner Aidan, and Aidan's girlfriend Jenna take Laney to the beach to distract her and break through the fog of fear muddling her brain...
When they got to the beach, they found a spot in some light shade and spread out. As late as it was in the afternoon, the beach was fairly deserted. Aidan and Jenna took off to play in the waves, leaving Cooper and Laney alone. She sat with her hands around her knees in a relaxed position, staring out at the waves without speaking. At first, Cooper talked about this and that, ignoring that it was virtually a one-way conversation. After a while, he fell silent, trying to come up with something else to say. He stared out over the waves like she did.

“Laney. When I went to talk to the chief, I asked him to take me off your case.”

Her head spun in surprise, then she seemed to swallow the information with resignation. “I understand. It’s a good decision. It’s not safe to be around me.”

“No! Oh, no, Laney, you don’t understand.” He turned her head so he could look into her eyes and make sure he had her full attention. “I asked him to take me off the case because--I tried to explain before, but I guess I didn’t do a very good job.” He sighed, then started over. “I didn’t ask to be taken off the case because I’m worried about the danger. I asked to be removed because… Laney, when I’m with you, my thoughts aren’t very...professional.” He saw a glimmer of understanding in her eyes. “In fact...” he took a couple strands of her hair between his fingers, sliding down their length, all the way out to the ends. Then he released them to touch her face, his gaze flickering back and forth between her eyes. “...my thoughts when you’re close like this are about as far from professional as you can get.” His heart was in his throat. He leaned in and softly kissed her lips, meaning to stop there, but he felt himself falling deeper and deeper.

There was a point at which Cooper knew the kiss would explode into something else—something so intense it wouldn’t have mattered if every man, woman, and child on the beach had been watching them, he would have had no choice but to lean her back onto the sand so he could tear off her borrowed swimming suit—and that point was approaching like an express train. With difficulty, the gentleman in him overcame the pure animal lust, and he pulled back. As he did, he opened his eyes to take in her reaction. He saw, to his great pleasure, that she was having trouble resurfacing from the dark place within where her desire swam. 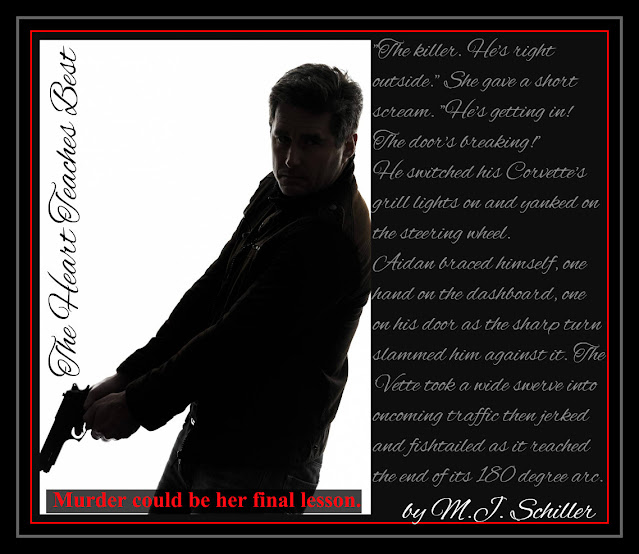 Hopefully, that makes you want to run to the beach with some hunky policeman with broad shoulders. In the meantime, share with us what the perfect vacation would be for you. Would you want to escape to a mountain cabin? Take in a Broadway show? Hit the sand? Or do something else altogether?
If you'd like to read the rest of Cooper and Laney's story, you can find it here:

Thanks for reading! I guess this will be my last blog post here, (look for an announcement tomorrow), but you'll be able to find all your favorite Gems on Facebook on the Romance Gems: Where Authors and Readers Meet page. And you can always catch me at M.J. Schiller, Romance Author. Until next time, enjoy your summer!