It's Spooky Time for This Author! by Kathryn Hills #RomanceGems 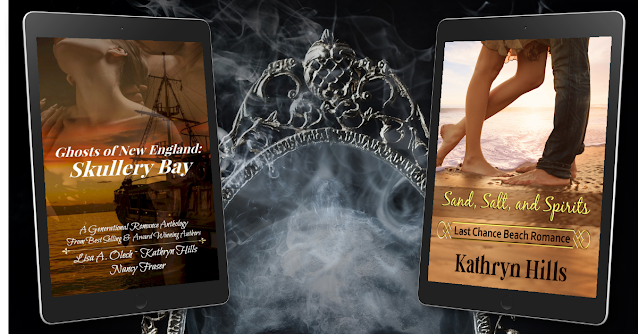 It may be the heart of summer, but it sure feels like Halloween to me! Great, since I LOVE all things mysterious and spooky. This year I’m getting back to my paranormal romance roots with two new releases.

An anthology unlike any other, it features...

She’s the daughter of his fiercest enemy.

Their love is the beginning of the legend.

She’s the heiress determined to restore Fairwinds to its former glory.

He’s the solicitor working as a caretaker because of the deadly curse.

Their love will rebuild the legend.

She’s the daughter of one of the FBI’s most wanted criminals.

He’s her bodyguard, and not at all what he seems.

Their love will return dignity to the legend.

She’s the new owner of Fairwinds, a flaky artist who talks to ghosts. Repeatedly.

He’s the staid, young professor there to document Fairwinds' history.

Their love will make you believe in the legend.

Watch the Trailer for Ghosts of New England: Skullery Bay 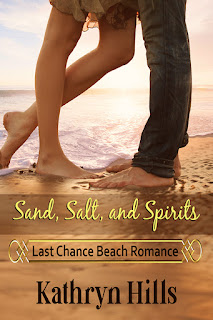 Next, I'm headed back to the beach with SAND, SALT, AND SPIRITS - A LAST CHANCE BEACH ROMANCE - Releasing November 2, 2021

Can a weekend visit to Last Chance Beach undo decades of brokenhearted memories? Conjuring up some island magic might just be the trick. Or treat!

Kyle Worthington hasn’t returned to Last Chance Beach in years. He’s worked hard to prove himself to his overbearing father and the rest of the world. Now it’s October, and the vacation island paradise is celebrating the season with an island-wide Fall Festival. Family obligation demands he participate. Everyone will be there, including the ghost that haunts his grandparents’ B&B.

The running joke that Kyle never sticks with anything—not a career or a woman—will continue to plague him. Unless he brings a knockout of a date to the weekend-long event. Cassandra Corwin fits the bill perfectly. Kyle’s had his eye on his brilliant, beautiful coworker since day one. But Cassie is an enigma, a loner. There’s no room in her life for anyone except Odin, her goofball of a Great Dane.

Will this woman of mystery agree to Kyle’s scheme to impress his family? Can two near strangers from opposite worlds survive family gatherings and back-to-back Halloween events while pretending to be a couple? Kyle’s father seems hell-bent on derailing everything before they even shout “Boo!”

Or will the island’s magic prove too powerful for them to resist?

I hope you'll join me for some sexy, spooky fun later this summer and autumn. You can find all my book news at the links below!

THANK YOU for reading!