Who writes dogs into their books and why. @BonnieEdwards #RomanceGems 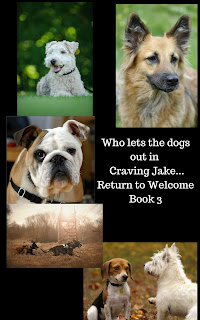 August's theme is dogs and pets. It is an old knowledge now that dogs on covers sell books. This knowledge is from before the internet and before self-publishing became a viable choice for authors. This conclusion came from focus groups. They gravitated toward cover art with dogs. (And horses and children, too)

Dogs were not really characters then, but sometimes they'd show up as a means to get the protagonists together on the page.

Today, in my books at least, the dogs I feature have real purpose in the stories. The books wouldn't be the same if they weren't there.

They are matchmakers. They are heroes. They are sources of conflict and resolution. They are sounding boards. They are tools used in a romantic suspense. They have opinions they seemingly express with gas emissions, smiles, nudges, and effective glares.

Also, the dogs in my books mean something to me, personally. I bring some back to life to live again between the pages. (I sniffle when I write them.) Some are still alive and part of my life today. One passed away while I wrote a trilogy of books with her having a starring role.

Which brings me to Love at Christmas, A Collection. These three stories span the Canadian/US border and Bella features in each one. She was a sweet poodle-cross who chose the hero for her owner. Bella brings more people together in the following two books.

Love at Christmas is always a bargain at half the cost of separate purchases of the trilogy.

And it's August already...Christmas is around the corner. (say 4 little boys I know)

In Love in a Pawnshop, I introduce an opinionated pit bull, named Razor. But one book wasn't enough for my Beau (more about him on the 15th) and he's been a big part of my Return to Welcome series starting with Finding Mercy. 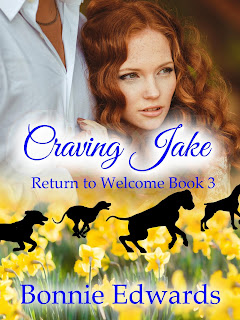 He appears briefly again Loving Logan but in Craving Jake he rises to hero status when he saves lives and warns of danger. Craving Jake will be released in early September. When I return from a much-needed holiday, I'll be sharing links for a pre-order to my newsletter subscribers. You can sign on here:  Bonnie's Newsy Bits