CHICKENS ON MY SIDE OF THE ROAD by Hannah Rowan #RomanceGems

The topic of city girl vs. country girl seems to be popping up frequently in my life lately. I was reminiscing with my daughter-in-law about a brief, unfortunate time when I left New Jersey as a child and moved to Michigan for a few months that felt like a century.

Imagine the culture shock of a kid moving from very urban Newark, NJ, to a farm in Michigan that included not just an outhouse, but chickens. Chickens who pecked at my skinny little nine-year-old legs every time I walked through the yard on the way to said outhouse. It was terrifying.

Chickens seem to be the current must-have item for many people I know. A friend in northern New Jersey built a palace for her new brood. Another acquaintance ordered 50 baby chicks through the mail. At the assisted living where I work, we joined a farm project where we borrowed an incubator and hatched 12 baby chickens. We had to turn the eggs every 90 minutes. Do mother chickens do this? When do they sleep

I recently read a book called HOW TO SEDUCE A TEXAN by Karen Kelley about an out-of-her element city girl reporter who goes undercover to a dude ranch to do an exposé on the hero, who is on to her and puts her in the most primitive accommodations imaginable. And that included not only chickens but a psychotic rooster. I felt her pain. 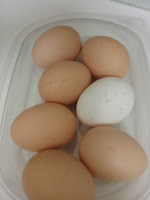 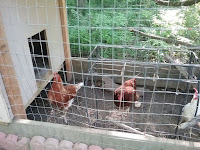 Now I’m not only reading about chickens but I’ve acquired four grand-chickens with the names Checkers, Siren-head, Cupcake, and another one I can never remember because who names their chickens? At least these chickens are safely confined in a lovely chicken coop—isn’t that what you call the houses chickens live in? Because this isn’t really my area of expertise. But I don’t want to think about the possibility of eating a creature I’ve been introduced to by name.

My grand-chickens aren’t about to become anyone’s dinner anytime soon, as far as I know. Their function seems to be wandering around making strange little sounds and laying multicolored eggs at an alarming rate. 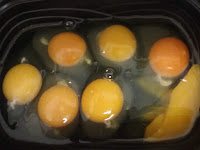 I’ve been sent home with many, many eggs every time I visit. So although I don’t want to make a meal of a creature I know on a first name basis, it seems I have no compunction about munching on my…potential great-grand-chickens. Is that a thing? 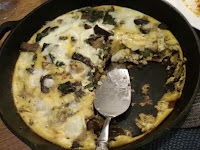 Don't forget to enter our monthly Rafflecopter drawing for some great prizes in Amazon gift cards! You can find the complete details and full entry form on our Monthly Giveaway page. Or, you can enter via the Short Entry Form.