Is Romance Dead? by Laura Hunsaker

I just read an article by the L.A. Times that asked "Will Kissing Ever Make a Comeback" and had the image of two metal figures wearing masks and kissing. (link to article here).

Is this a thing? How would that work?

He inhaled the scent of her hand sanitizer, mmm...lemon. She placed her gloved hand against his cheek. They gently pressed their masks together...

Okay obviously I'm being facetious here, but as a romance writer, I can't help but think about how I would write a romance and incorporate it.

I like escapism, so in my stories, I don't address it, but maybe I should? What say you all? Should our Romances being written right now reflect everything going on?

While I may have used a wee bit of snark at first, I wonder if I could make it work?

Lucy walked in the door from her first day back at work, instantly took off her mask and tossed it in the laundry pile. Washing her hands she called for her dog. Bruce, her lab, was ready to go.

"Who wants a walk? Who's a good boy who wants a walk?" She stuffed her mini hand sanitizer in her pocket, and grabbing his leash, she took Bruce out for his evening walk.

Once out on the trail, Lucy saw her neighbor Van out with his dog. Every day for a couple months now, they'd wave at each other and smile. But not today. She was prepared to finally talk to him. With restaurants being closed to inside dining, she was planning to grab a to go order and hope he wouldn't mind sitting on her porch. The weather was beautiful and she was excited to talk to someone after being cooped up for so long.

His mask was his favorite hockey team and she thought that it was cute how every one of his masks she had seen had all been different masks for the same team. Hers had cupcakes on them, because she just really thought it was cute.

"Hi Van! Hey, I don't know if you're up to it, but I was thinking of grabbing some dinner from Apple Garden tonight, and thought maybe you would want to join me? We could eat on my porch and you can bring your dog."

He smiled, she could tell because his eyes crinkled above his mask. "That sounds like a lot more fun than my night of streaming that new movie everyone is talking about and some leftovers."

I guess it wouldn't be that difficult to add in some of today's happenings without it taking over the story. What do you think? Would you prefer escapism? Would you mind seeing a tiny bit of reality mixed in? Will kissing ever make a comeback ;)

If you're in the mood for something you can really escape into, my Time Travel Romance Highland Eclipse is only $.99 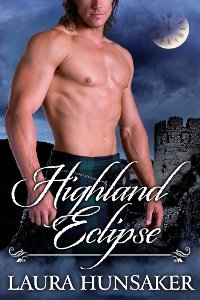 A member of an elite Time Ops team called the Eclipse Agents, Declan Wallace’s job is to jump through time. He maintains order in the timeline, he hunts down those who would time jump for their own purposes. But sometime Fate intervenes.

After a lifetime of living with illness, Lady Fiona McClure is proving to herself that she is finally healthy in an attempt to swim across the loch. If she makes it, maybe then her overprotective father won’t treat her as a child anymore. When she is snatched and dragged ashore by a man who thought she was drowning, her heart races for reasons that have nothing to do with the swim and everything to do with the man standing before her.

With a mission to finish, Declan can’t allow distractions, and Lady Fiona is definitely a distraction. But he’s discovering that living for the next mission isn’t as exciting as it used to be. Staying in the past is forbidden, but Fiona McClure is his destiny.